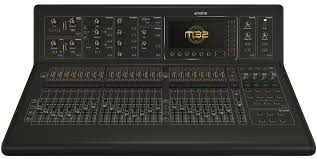 General
Midas is a force to be reckoned with. Many large live productions across the globe have been using a Midas for decades. The brand proves once again that they also know their way around digital mixing with their M32. This is a 40-channel mixer with 32 microphone inputs, 25 motorised faders, 25 audio buses and an internal 40-bit floating point bit rate. The large amount of effects, processors and routing options at your disposal are clearly shown on the 7-inch TFT screen. Moreover, the number of inputs and outputs can be expanded to 96 (!) via the AES50 protocol. Perfect for large productions where you need to switch between different groups! Additionally, there are several assignable knobs and controls on the M32 so you can make it suit your needs.
Midas M32: unlimited possibilities
Large racks with tall stacks of auxiliary equipment are a thing of the past. The M32 is equipped with several classic effects, like a 1176LN and LA-2A compressor or a 480L reverb. You can upload them into one of eight stereo FX engines. Each channel can be fitted with a full dynamic section (gate, compressor) and a 4-band parameter equalizer, the controls of which are on the channel strip section. Here you can control the gain (with adjustable high-pass), polarity, different buses and pan or balance. It is also home to a USB port. The M32 allows you to record 32 channels and play them back separately at a later time, for a virtual sound check, for instance. It can also function as a 32-channel in/out interface when you connect it to a computer. Moreover, you can easily incorporate it into your DAW with the Mackie and HUI protocol – great for the studio!
Buses, DCAs and monitoring
Mixers this size often have DCA groups (the digital version of VCA groups) that allow you to assign channels – like a complete drum mix for instance – and adjust the volume while the overall balance remains unchanged. The Midas M32 offers eight freely assignable DCA groups. What’s more, there are no fewer than 25 mix buses, and when you connect them to one of the 16 outputs, you can use them for the monitors of your musicians. There’s even an app on the market that allows musicians to mix their own sound on a phone or tablet! Also, the M32 is a perfect pair with the P16 monitoring system. The buses can also be used internally for bus processing, for instance. Plenty of options for a perfect mix!